An unstoppable momentum appears to be building around devolution and bus regulation.

What a difference a week makes. It’s not clear yet whether this is quite a Berlin Wall moment on buses and devolution – but at the very least it’s the equivalent of mass demonstrations in Leipzig. And we all know where that led to. This is how it happens – the pressure builds and builds and then with dizzying speed ‘all that is solid melts into the air’ and a new paradigm forms itself.  They don’t happen often but I’ve been through these moments before.  Most notably when the roads programme suddenly collapsed (after years of political, community and intellectual pressure) in the nineties, and transport policy shifted towards seeing public transport as a solution rather than a problem. A shift in thinking that has not been reversed. With big developments almost by the day there’s a risk that this column will be out of date before it’s published, but here goes…

Starting with the obvious: recent moves by Miliband, Clegg, Osborne and Cameron means that devolution in general, and bus regulation in particular, has now got the ‘big mo’. There’s plenty of noise in the machine but a party leader has put bus regulation front and centre of his devolution policy and Osborne has given devolution frontrunner, Greater Manchester, his blessing to press ahead with London-style bus franchising. Bodies are emerging to drive forward the strategic links between the cities (such as One North and Midlands Direct) and everyone wants more seamless, London-style provision in the city regions. All of which means that bus regulation can no longer be marginalised because more and more people that matter have made their minds up that London-style franchising needs to happen in order to facilitate the ongoing shift to more devolved decision making on local transport. This process will span the general election, but the process is currently on steroids because of the general election.

Ironically, an indirect victim of the devolutionary process was Mary Creagh who was moved on to International Development as a consequence of Jim Murphy’s re-deployment to stem the SNP tide. Creagh’s departure makes way for a Miliband loyalist and all round street fighter, Michael Dugher. He will relish selling a buses policy that he believed in before he even acquired this big personal and political opportunity. Too many Ministers and Shadow Ministers treat the transport role as a ho-hum chore in their glittering ascent, not worthy of too much of their application. They don’t give it the respect it deserves: given that transport is always in the news and everyone has a view on it. They pay the price. I suspect Dugher won’t make that mistake. Labour knows where it is going on both rail and bus – it’s about the selling of the policies now. And on bus there seems to be genuine enthusiasm from MPs and PPCs around a clear policy which makes sense on the doorstep and addresses real and practical voters’ concerns. It also leaves the small core of long-time deregulation sympathisers in Labour’s ranks – such as Lord Snape – high and dry, and looking like yesterdays’ men. The battle lines have been drawn up. The battle is about to commence.

However, it’s not the battle that it might have been as the Conservatives are not fighting head-on anymore because Osborne’s Greater Manchester deal has ceded the principle of bus franchising outside London. It’s difficult to argue that something is wrong if you have just included it in your flagship devolution deal. Indeed, the debate on the floor of the House of Commons on bus policy on 5th November saw Conservative MPs defending the record of their Government on buses – not bus deregulation per se. That’s not to say that the Conservatives may not still choose to throw a lot more at Labour’s buses policy as part of the general election melee – more that the option of arguing that London-style franchising outside London is wrong in principle is now unavailable to the Conservatives because of the Greater Manchester deal.

As for the Lib Dems I wonder if there is more to come from Clegg as he is currently outbid by both Labour and the Conservatives on buses and his previous remarks on the issue suggest that is not where he will want to be.

Tyne and Wear blazes a trail

The good people of Tyne and Wear also deserve much credit for the ‘big mo’ on buses. They are made of stern stuff and have not been cowed by Souter’s ugly threats and made-up scare stories.  The unanimous decision of the North East Combined Authority on Quality Contracts has now been taken and it has left the operators with nothing but shroud waving about terrifying black holes in Nexus numbers which are supposed to leave politicians trembling with fear that Tyne and Wear will look like Detroit if the QC goes ahead. The trade press naturally and gratefully swallows all this nonsense whole without bothering to interrogate the figures.

Anyone who actually looks at the operator’s figures will soon see they have resorted to some blatant double counting to get to their black hole claims. For example, the huge costs of the QC they quote disregard the fact that without a QC (i.e. under their preferred option) there will still be public subsidy for the buses. If this is the best the operators, and their legions of highly paid advisors, can come up with for the Quality Contract Board then no wonder they seem so subdued. And, by the way, some are trying to present the Board as a body that will decide whether or not the QC goes ahead. It doesn’t have that role. Its job is to give an opinion as to whether or not the QC meets the Public Interest tests or not. It is always Tyne and Wear’s decision whether or not to proceed with the QC. 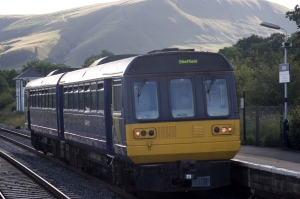 Could Pacers soon be rightly consigned to history?

A new vision for regional rail?

Meanwhile, on regional rail the clouds are lifting a little. The overall base for the Northern franchise is looking like it will be more respectable than the DfT started off with. The Pacers look more likely to follow their long departed Leyland National bus siblings sooner rather than later into oblivion. Perhaps to next appear in a happier yet appropriate recycled format – perhaps, as cans for containing sardines. If Northern is now less about survival and more about something that starts to look and feel less like a charity shop offering then it creates the space for more ambitious visions of where it goes next. The new Scottish franchise feels much more rooted in where Scotland wants to be economically, socially and culturally than anything that has ever emerged from DfT which tends to be rail siloed, beige and consumerist. Scotrail will become the obvious comparator for what the North will aspire to.

So, what happens next? Well, it will be interesting to see if cracks appear amongst the operators. How long can Arriva (wholly owned subsidiary of the German Government) keep angrily and myopically aligning itself with a policy of bus deregulation in a way that sets itself against the emerging political consensus and risks the embarrassment of a German owned company being called out for lobbying for a system that it would never accept back in Germany. Awkward.  How long before one of the other overseas-owned multi-nationals finds the courage of its convictions to say in public what it says in private i.e. that of course we are up for bus franchising. How long before Bus Users UK and Campaign for Better Transport bite the hand that feeds them and start reflecting more clearly what passengers want in the city regions – single integrated public transport networks that passengers have some say over.

Meanwhile, whatever they all decide increasingly looks like a sideshow. A lot clicked into place in recent weeks. More people that matter are realising that it’s attainable, within a single Parliament, to give the city regions integrated local public transport networks with simple smart ticketing driven forward by a single guiding mind. This can work alongside better links between the city regions, through those city regions working together in new alliances. The best ideas are simple. The best ideas win out in the end.

This article was first published in Passenger Transport magazine.