As part of our ‘Healthy Streets for All’ year of action, we were delighted to sponsor this year’s Healthy Streets conference which took place at the Guildhall in London. The day amply illustrated the ever growing ranks of cities seeking to put people, their health and wellbeing at the centre of their urban planning. In a day packed with inspiring city case studies, the one that particularly stood out for me was Vienna – named the world’s most liveable city nine years in a row. Maria Vassilakou, Vienna’s Vice Mayor and Deputy Governor painted a compelling picture of how this came about. Here’s what we can learn from Vienna’s approach – note also how it meets all ten Healthy Streets Indicators, flagged up in bold.

Children are the key to a healthy city

Vienna’s urban planning takes the needs of children as its starting point. The city’s leaders believe that if a city is good for children, it is good for everyone (Everyone feels welcome). A city that welcomes children means that families, and young professionals thinking about starting a family, are not driven out to the suburbs but are encouraged instead to stay and build their lives in the heart of Vienna. Doing so not only creates a vibrant, multi-generational environment, it also cuts the congestion and pollution associated with commuting (Easy to cross, Clean air, Not too noisy).

Places that are designed around children are pleasant places to be. Designing for the needs of a child means plenty of safe space for walking and cycling, restricting car traffic and providing opportunities for play and exploration (People choose to walk and cycle, People feel safe, Things to see and do).

Some 50% of Vienna is green space and they intend to retain this (Shade and shelter). City streets are dotted with trees and interspersed with splashy water features which are great fun for kids and offer interest, animation and a calming environment for everyone else. The idea is for people to feel relaxed, slow down and take time to enjoy city spaces which offer them something to experience (Things to see and do, People feel relaxed).

Vienna, home of grand palaces, high culture and an impressive musical, artistic and intellectual legacy (Mozart, Beethoven, Klimt and Freud all called it home) is not necessarily the place you would expect to prize affordability and access for all. But you don’t get to become the world’s most liveable city by excluding people. Vienna’s vision is for a city where everyone can afford to have a good life (Everyone feels welcome).

An annual public transport ticket is 365 Euros, just 1 Euro a day to travel throughout the city! Imagine that. This, together with a welcoming urban realm, helps to explain why 73% of trips in the city are by public transport, cycling and walking. They aim to increase that to 80% by 2025 (People choose to walk and cycle).

The city also offers annual grants to communities to transform under-used spaces into temporary ‘neighbourhood oases’. Crucially, these must be available to everyone ‘without consumption’ – places that can be enjoyed without buying anything (Places to stop and rest).

The party where everyone’s invited

As Maria put it in her presentation, ‘People will go where the party is…let your city be the party’. Vienna is all about creating excitement and interest (Things to see and do). Giving children space to play. Creating public spaces that allow for temporary uses. Building an environment where everyone feels welcome. As UTG lead Board member for health, Jon Lamonte put it in his presentation about Greater Manchester’s emerging ‘Streets for All’ programme, we need to ‘make streets an invitation’. An invitation to play, to enjoy, to stay.

What do Amazon, Starbucks and the Boeing 747 all have in common? They were all founded in what is now the 15th largest Metropolitan area in United States; Seattle. Despite its location only 59 miles from one of world’s most dangerous Volcano’s, Mount Rainier, Seattle’s population has continued to grow and in 2016, saw population growth of 3.1%, making it the fastest growing major city in the US.

Due to Seattle’s unique Geography, nestled between the Puget Sound to the West, and Lake Washington and the Cascades to the East, the main flow of transport North to South is guided through what is a relatively narrow stretch of land. This invariably has led to high levels of congestion and an inability for Seattle to greatly expand its highway networks. No wonder Seattle boasts one of the best and well used public transport (or transit as the American’s like to say) networks in the US.

Buses play an incredibly important role in Seattle. Roughly 1,800 buses are operated by the King County Metro authority and Sound Transit agency, providing between them a pretty comprehensive network of buses.

The buses themselves are generally high quality vehicles, providing capacious cabins, accurate next stop announcements, and – contrasting with the lighter weight buses that many UK operators use – boast smooth and comfy rides. Many buses are hybrid and Seattle also has something that can no longer be seen beyond the walls of transport museums in the UK – trolleybuses. Whilst the overhead wire for trolleybuses can frustratingly ruin a tourist’s picture, the environmental benefits they deliver for such large urban centres is quite evident. Perhaps it was just the dominant flow of sea air from the Pacific Ocean, but Seattle felt and smelt fresher than many European cities I have visited, particularly London.

Whilst the bus in Seattle provided a welcome improvement over UK examples in terms of on-board passenger experience, in other areas it’s depressingly familiar. The bus drivers, whilst not unfriendly, were not particularly helpful. Fares were quite expensive at $2.75 for a ride, although this did include the ability to hop to another bus within four hours of purchasing a ticket. Punctuality was also not particularly brilliant, with buses missing from the schedule and drivers taking liberty with their break times.

Perhaps this was just an unlucky experience because Seattle has historically taken bus priority very seriously indeed. In 1990, the 1.3 mile long Downtown Seattle Transit Tunnel opened. Looking a little like the Washington DC Metro system, this tunnel was not built for rail but for trolleybuses. Such a commitment to big bus infrastructure is rare and was welcome to see, providing light rail like service quality for bus passengers. Fast-forward to 2009, and buses started to share the tunnel with the newly opened Link light rail system – an interesting sight, although catching a bus and Link train together is something of a challenge.

In 2012, the Downtown Seattle Transit Tunnel carried an impressive 52,000 passengers per day, of which 10,000 were on the light rail system. Rather disappointingly, this interesting transport set up will not last much longer. Buses will soon be relegated to street level in order to accommodate planned expansions for the light rail system through the tunnel system.

With significant population increases to contend with, it is little wonder that Seattle’s transit authorities have turned their attention to developing the comprehensive Link light rail network. The first 13.9 mile long phase opened in 2009 between SeaTac Airport and the City Centre.

The route operates via a number of major new suburban developments. Link rolling stock and operations are an interesting combination between a tram and a train. In the city centre it operates very much like a tram but once it reaches suburban areas, the driver unleashes the power delivered by the 1500V overhead wires, accelerating passengers to 55mph.

The concept behind the Link network is a classic example of transit oriented development. The first route has been designed to take in areas of new residential development, particularly around Othello and Columbia city stations. Within half a mile of Othello station is a diverse population of just under 8,000, with a wide range of social and market rate developments nestled alongside each other. By building the Link network where major urban development has occurred, Seattle’s city planners have helped to facilitate sustainable population growth by placing public transport at the heart of new developments. 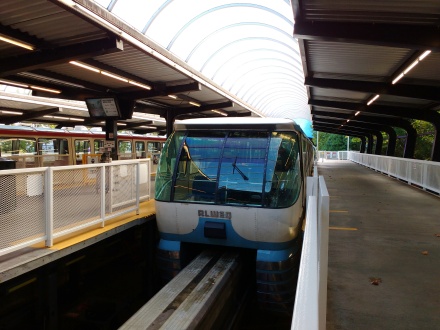 For whatever reason, the monorail as a mode of transport has always suffered a bit of an image problem, forever being associated with a theme park attraction (see Walt Disney World), rather than a serious public transit network. The Seattle monorail is certainly an attraction, but it does also provide a key public transit link, connecting passengers from the Westlake transportation hub to the Space Needle. Whether it’s Disney World, Kuala Lumpur or Seattle, I’m always astounded when I ride on a monorail as to why it’s never caught on in a big way. It is such a fabulous way to travel, and when boarding this monorail at the grand age of 29, I felt the same giddy excitement when traveling across the Seven Seas Lagoon 20 years earlier.

Opened in 1962 to coincide with the opening of the Space Needle, the original vehicles are astoundingly still in operation today. At $2.50, it is not exactly a cheap ride, but it is a thoroughly enjoyable and memorable one. Admiring the fantastic views that one can enjoy from a monorail, as well as noting the limited footprint at ground level for monorail infrastructure, I keep asking myself why there aren’t more monorails in the world?

As a visitor, Seattle is a really easy place to get around. As a transport planner, I appreciate its historical commitment to the bus and trolleybus, although I have concerns about its future, playing second fiddle to the new Link light rail network. Link is clearly the vision Seattle’s transit planners have for the future of the city’s mobility, and its deployment is a good example of transit orientated development working. During 2017, nearly 50% of commuters to downtown Seattle arrived via mass transit, aided by the comprehensive bus network, well located Link light rail network and extortionate car parking charges. Seattle then is a great example of a successful transport network that also boasts a huge array of interesting modes; buses, trolleybuses, streetcars, light rail, heavy rail, and of course, the monorail. Perhaps there’s some lessons that transport and city planners in the UK can learn from Seattle’s experience.

Stephen Bellamy is Business Development Officer – Policy at Nexus, and is on secondment as a Policy Advisor at Urban Transport Group

In his latest article for Passenger Transport Magazine, Jonathan Bray says in this time of seismic political shifts, the party conferences have become more interesting and new ideas for transport are emerging.

Read ‘What I found on the conference circuit’ here.