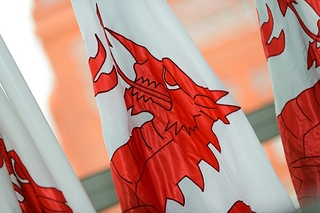 Wales is positioning itself as a small country that can do great green things (Picture: National Assembly for Wales on Flickr).

Scotland got a comprehensive deal on transport powers as part of devolution and has forged ahead with some confidence – particularly on rail. The state of play on devolution of transport powers in Wales is less clear cut and remains complex and unresolved.

Small countries can do great things on transport (the Netherlands and Switzerland are among the best in the world on all sorts of measures of public transport integration – and of course the Dutch are world-beaters on cycling). Wales is positioning itself as a small country that can do great green things that make people want to live, work and invest there. The flagship transport measure being an Active Travel Bill which puts more of an imperative on local transport authorities in Wales to prioritise cycling and walking.

On bus and rail the direction of travel is less clear cut, with powers uneasily divided between Wales and the absentee landlord in Whitehall.

There’s also an impasse on local transport governance. Wales is served by four local transport partnerships which bring together existing local authorities in a voluntary way. There’s a sense from many however that this isn’t enough to bring efficient and integrated arrangements for public transport services and ticketing – especially in the area which covers Newport / Cardiff / Bridgend and the Valleys. This was certainly the impression that I got at two events in Cardiff that I took part in earlier this year. The first was giving evidence at a Welsh Assembly Enterprise and Business Committee and the second was an Institute of Welsh Affairs conference.

Part of the context for this fresh impetus for the debate was that the Valleys are changing. The physical scars on the landscape left by primary industries are healing – black landscape reclamation is turning into green tourism. And although the social and economic scars are not so easy to heal there is change there too – with population on the increase after years of decline, and steady diversification of the Valleys’ economies. Meanwhile Cardiff now has the look and feel of a capital of a small country. Its growing big city economy is also the bedrock of the wider Welsh economy and more people are commuting into the city as a result.

The Valleys are linked to Cardiff by a rail network that makes the best of its basic stations and bottom of the heap rolling stock, but forthcoming proposed electrification of the South Wales main line, and the Valley lines, offers the opportunity to do something special with the network. Especially if this is linked to the creation of a transport authority for the area that could make sure that faster electric services are linked in to a fully integrated bus network. By the nature of their geography the Valleys are ideal for a hub and spoke system with rail providing the rapid links to Cardiff, and bus services radiating from key stations – all bound together by smart and integrated ticketing. Just treating the electrification of the Valleys as a rail engineering project with knock on benefits for rail passengers would be a major missed opportunity.

As ever though governance change is hard. Politicians and officers fear that they will lose out from the creation of a new body – either in terms of influence or responsibilities. Plus there’s an added difficulty with the Bridgend, Cardiff, Newport and the Valleys area. Nobody knows what to call it! It’s not exactly a city region. Extending the Cardiff brand to cover it would also be neither diplomatic or quite accurate. Everyone knows what this area it is – but there isn’t a word for it! What it could be though is a great place to live and work as the century progresses. The green valleys, Cardiff’s buzz – a big sub-region in a small country doing great things. Sometimes transport’s role can be overstated in transforming regions – but not here. Core urban bus services, fast electric services to the Valleys’ hub stations for bus feeder networks. One brand, one smart ticket, one network. Binding local economies more closely together into a region that could hold its own. It’s there for the taking if the politicians are ready to take a leap forward on getting the powers they need from Whitehall and in taking some big, resolute decisions on bus regulation and transport governance.

The papers from the excellent Institute of Welsh Affairs (IWA) conference on ‘Making a Welsh Metro happen’ can be found here.  The North of England could really do with something similar to the IWA. The IWA gets the right blend of academia, politics and interest groups together into events and publications that stimulate a grown up, informed debate about where Wales goes next.

The report from the Welsh Assembly Enterprise and Business Committee on integrated public transport in Wales makes some sound recommendations on ways forward and can be downloaded here.