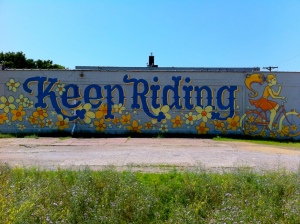 A few snippets about me and cycling:

And finally (sharp intake of breath):

There. I’ve said it. I’m a passionate advocate and enthusiast for cycling in theory but I don’t actually ride myself. Well, I do but only on holiday in places where it feels safe and nicely separate from cars. Like the lovely ride we took in Croatia (which unexpectedly took in a nudist park – bit of an eye-opener). Or pootling around the beautiful (mainly car free) island of La Digue on honeymoon last year. Later this year we’re off to Center Parcs – I can’t wait to get back on two wheels and ride the woodland trails. But what would it take to get me cycling at home? 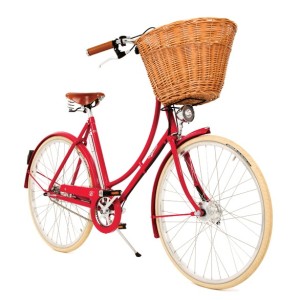 A red Pashley - my dream bike

The biggest thing that would make the difference for me, and I’m sure this is the case for many others too, would be wide, continuous cycle lanes that are visibly separate from car traffic either using striking paintwork (like the London Cycle Superhighways) or a raised kerb.

Without this basic infrastructure, no amount of softer measures, be they training courses or cycle-to-work incentives, would convince me to cycle in Leeds or any other city. Softer measures are, of course, important, but they need to form part of a wider package that includes improving the infrastructure.

It’s not just the cars that deter me from cycling. Other cyclists can also be quite scary – mainly from the sense that many are ‘built for speed’ – Lycra clad and hurtling along at a terrifying pace. Perhaps wider lanes would allow these speedy cyclists to peacefully co-exist with those of us proceeding more sedately. I’ve written before about cycling in Copenhagen – I didn’t see any Lycra there – is the urban commute really the place for this kind of cycling? Or is it that in many UK cities people are forced to cycle in a more defensive fashion with a ‘me versus the traffic’ attitude stemming from a lack of proper infrastructure and priority for people on bikes?

I’m sure there are lots of other aspiring bicycle belles (and boys) who could be lured onto two wheels if only proper road space were to be allocated to people on bicycles. More city leaders outside London need to take the issue by the handle bars and champion cycling so that, as is beginning to become the case in London, it is seen as something that everyone can do – not just the Lycra wearing few.

4 thoughts on “Confessions of a wannabe Bicycle Belle”