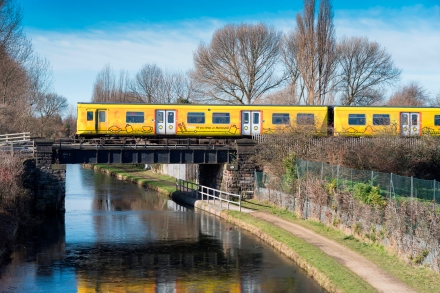 “Liverpool, surreal. Liverpool, sardonic. Liverpool battered dignity. Liverpool, flotsam of maritime memory. Liverpool never quite what it was because everything it does changes what it does … Liverpool, welcoming the world. Liverpool cutting edge, keeping pace, dropping anchor.”

Extract from The North by Paul Morley

Liverpool is different. And so is its very own rail network. None of the other city regions has a high tempo, heavy rail electric network quite like this. A not quite S-Bahn. Bright yellow electric trains that radiate out across the Wirral, chalking off the town and suburban centres at regular intervals, before feeling the pull of urban gravity and returning to a whirl around city centre underground loop before being flung out again back towards the suburbs. At the same time another route uses a tunnel sitting above the city centre loop as its trains shuttle north to south, to and fro across the conurbation.

The nearest equivalent to Merseyrail Electrics would be the Tyne and Wear Metro. The other bold example from those far away fearless modernist times, the 1970s, of taking a ramshackle fragmented commuter train network and using new city centre tunnels and rolling stock to gift the area what amounted to a new rail network. A network that reorganised and re-imagined the way people used, thought about and understood their conurbation.

Liverpool is different. The first iteration of the Strategic Rail Authority was a fairly dire combination of Department for Transport lifers and neo-liberal true believers who were passing through. Consequently, the SRA was neither strategic nor authoritative, leaving barely a ripple on the surface when it finally sank beneath the waves. However, there was one act of bravado which somehow slipped through. In 2003, the SRA handed over the Merseyrail Electrics contract to Merseytravel and delivered by a Serco/Abellio joint venture of up to 25 years and with enough funding attached so they could quietly get on with it. The smoke had hardly cleared from the uniforms of the previous franchisee that the staff relished burning, when performance and passenger satisfaction on the new franchise went up like a rocket. It was ‘Miseryrail’ no longer. A text book example of the instant boost to performance, made by having those in charge of a service in the same geography as those operating.

That stability and local control has provided the basis for this unusual operation to push on. It’s not just the unique nature of this network that makes it feel different to the user, it’s also (give or take at the margins) the fact that all of the stations are staffed all of the time. Whereas on other networks too many local heavy rail stations were notable for their lost and abandoned, take it or leave it, ambiance (their lop-sided station signs pock marked by the impact of air rifle pellets), this was not the case on Merseyrail Electrics. It felt like a network that wanted your business; one where someone was watching over you.

Franchise control has helped Merseytravel to build on that base in multiple ways – through working with Serco/Abellio as the franchisee to import some Dutch innovation on cycle hire and facilities through to combining convenience stores with booking office functions. Franchise control has gone alongside giving more of the city region’s significant sub-centres such as St Helens and Newton-le-Willows – the interchanges they merit – as well as a new hub at Liverpool South Parkway.

And there’s been innovation in suburbia too. Including an eco-refit for Ainsdale station and a brand new station at Maghull North specifically to ensure a new housing development had good public transport provision in place (before the concrete on the carports had set).

All the stations are now being prepared for the biggest change to the network in years – new rolling stock. When I was in Liverpool a few weeks back I went to see the mock-up of the new rolling stock (the first trains are being built now), which was being temporarily stored in a ventilation plant for one of the road tunnels under the Mersey. And the more you look, the more you see (it’s a very realistic mock up!). The doors have a crafty ramp which extends to provide as near level access as you are going to get. The trains will be fully connected allowing for a fully connected control centre and fully connected passengers. Passengers who, when they aren’t mainlining the results of their Wi-Fi connections, will be able to see the view ahead on the railway line through the cab window and doors (unless the driver flicks a switch and the windows go dark that is!). They will be nippier and higher capacity too. They will also be capable of being powered by both third rail and overhead electricity as well as having ‘passive provision’ for a battery pack. In short, these publicly owned (by the Liverpool City Region Combined Authority) trains are setting the standard for urban commuter trains.

Their ‘go anywhere’ capability also lowers the bar for more network extensions. Merseyrail broke the bounds of its original tight operating area some time ago by reaching down into deepest Cheshire with extensions to Chester and Ellesmere Port in the early 1990s.  The new horizons of Skelmersdale, Wrexham and Preston now beckon.

However, looming above all that is the need to do something about Liverpool Central – which sits on both the city centre loop and link lines, and which is struggling to cope with the trains and passenger numbers it already has. As its name suggests, Liverpool Central is also a prime commercial site – which brings both the blessing of potential developer contributions but the curse of trying to expand a station located in such a tight spot both below, at and above ground level.

Meanwhile, the combined authority is also taking up the former transport secretary up on his offer to look at taking over the Merseyrail infrastructure to create a vertically integrated network. The deal maker – or deal breaker – is likely to be around who stands behind what level of risk. Whilst the city region maps out its own destiny on its own rail network, frustration abounds over what the future holds for long distance services beyond its borders. Already relatively poorly connected to the intercity network for a city of its size, what it will end up with from the shifting sands of HS2, the TransPennine upgrade and Northern Powerhouse Rail is far from clear. And if Liverpool Central is a pinch point on Merseyrail Electrics, Lime Street (despite the welcome recent expansion of capacity) and its approaches, is a pinch point for the city’s aspirations for high speed rail connections.

This is exacerbated because Liverpool is as serious a port city as it ever was (though this is not as immediately visible as it used to be) and can now accommodate the largest container ships in the world. The craziness of routing the majority of the nation’s maritime imports and exports through the busiest corner of the country (the South East) – at vast public expense in knock-on road and rail infrastructure – is under challenge from Liverpool and the North’s other increasingly punchy and determined ports. But accommodating a growing stream of monster container trains winding their way out of the docks is another reason why Liverpool needs to know what the plan is for increasing rail capacity both due south and due east.

As well as its rail ambitions, the city region is also progressing its options on the future of the bus network, potentially opening the way to giving the city region a fully integrated public transport network where a modern bus network complements the country’s most technically advanced commuter trains. Trains that are capable of plugging more places into the heart of a city centre that has definitely got its buzz back. With both the two main UK political parties backing city regions to take control of their local public transport networks, this unique city could well be on the brink of finding another way to be different.