The small team of staff at the Urban Transport Group has a big job to do in making the case for urban transport, in providing thought leadership on the future of the sector and in supporting our professional network so that our members can do more for less. You can find out more about how we do this here. However this week we thought we would show what this all means in terms of what we get up to at UTG in a typical week. This is using what we did Monday – Friday last week and we’ll be posting each day. Hopefully it will give an insight into the inner workings of the Urban Transport Group.

Why are we doing this now? In some ways, with general election purdah the week has not been typical with fewer meetings with Government. However, our Senior Economist, Pedro Abrantes, is leaving us soon so it seemed like a good opportunity to capture some of the things that he does. We are not advertising for a new Senior Economist but we are recruiting for a new post of Assistant Director so if you like the sound of our team then why not check out the ad?

Today I popped into the office first thing and then headed up to the North East to a meeting about transport skills which was held at the Newcastle College Rail Academy. The Rail Academy was super cool, with classrooms on one side and a mock-up of a rail depot in the other half, which was pretty impressive! And there’s a short stretch of track outside too: 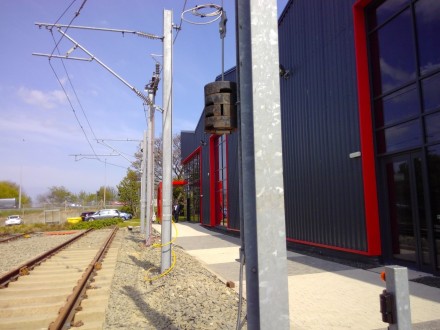 It was also a really sunny day, my favourite kind for a train trip through the countryside.

Well, last night Finland didn’t get through to the Eurovision semi-final, but Australia did! Of course.

Today I progressed the organisation of various meetings such as the air quality teleconference with the board, and a partners catch up with our closest stakeholders, gathered papers and documents for Jonathan’s upcoming trip to Montreal for the UITP Global Summit.

I even taught Pedro how to use Doodle.

At lunchtime I made another trek to the university library to help my friend with her assignment referencing and grappling with Microsoft Word. Again, one of my specialties! On the way back I noticed Millennium square was heaving with British people sunning themselves in the near heat wave conditions approaching 17 degrees.

When I got back I spammed the Board’s diaries with 2018 meeting dates. 🙂

This afternoon I gathered the comms candidates CVs in preparation for Jonathan’s interviews with them all tomorrow.

I had my exit interview with HR – opportunity for reflecting on the past 7 years and sharing some candid thoughts.

Then I gave feedback to two unsuccessful consultants on smartcard project – important to keep them on board as build up relationships as this is an area where we anticipate more work in the future.

Today I did some preparation for round of meetings with potential comms consultants tomorrow. Took a call from a key trade press journalist on the aftermath of the mayoral elections and implications for transport.

Had a catch up with Ben Still, Managing Director of WYCA with a focus on lie of the land and how we respond in the first six months of a new Government. Also briefed our Chair, Tobyn Hughes in advance of a meeting he was about to have with a key DfT official, as well as having  a catch up with our main TfL contact mostly about next steps on the smart futures workstream that TfL leads on for UTG.

Got my head down for a few more hours on knocking into shape the final version of our forthcoming report on the Scandinavian way to better public transport. Plus finalised our Time To Change pledge on mental health – appropriate since its mental health awareness week!

Today has been further work on Insight. Working up to the launch this is going to take quite a lot of my time. The good news is the technical aspects of the project are starting to drop into place and I should have a test environment set up over the next week.

We also got a draft report back from a consultant this afternoon, so I have spent some time checking the content and scheduling a meeting to give feedback.

Tomorrow I am off to the Cycle Cities conference, so I have been planning the sessions that I would like to attend to try and maximise the conference.

We lost the cricket last night, and my shoes died in the process. Onwards and upwards!