DfT have been sending out some clear messages recently that although the funding level for BSOG may be fixed – the way that it’s paid, and what it’s paid for – is not. Public money is a precious commodity these days and although the ‘could have been worse’ reductions in BSOG indicate that the bus is not quite the soft political touch it used to be, Ministers are not convinced that they are getting as much as they might do from a big block of cash that’s paid out on a largely flat and undifferentiated basis.

PPI is now just one of a number of options…

Prior to the election a Per Passenger Incentive (PPI) option was where BSOG was headed. The now defunct CfIT were the main cheerleaders for it and threw a lot of resources at ‘proving’ the case. With CfIT gone the doubts have crept in over a system that could have incentivised operators to attract more concessionary travellers in the off-peak. For the Government to be paying twice for older people to travel for nothing doesn’t seem such an attractive idea in the current climate. And then there’s the way in which a PPI would shift subsidy from the rural to the urban – again not so enticing given the electoral base of the coalition.

…what are the others?

So with the clean-ish slate of a new Government the objectives have changed. They want to see what the main players in this debate (operators and local government) have to say about whether or not better outcomes can be achieved for the BSOG cash – whilst minimising unintended consequences and any de-stabilisation of the industry. In this context PPI could be an answer – but it is no longer the pre-ordained answer.

So what are the main players’ in this debate’s opening positions?

CPT’s position is that there should be no change. BSOG does the job, it’s simple, straight forward and there’s more than enough change going on for operators to deal with as it is. It’s not broke and it doesn’t need fixing.

Would operators sign up for a single pot approach?

At the other end of the spectrum LGA is advocating the pooling of all bus subsidies  – with NCTS, tendered services and BSOG funding all in the pot together. This is part of the LGA’s wider than transport agenda of devolution to local government wherever possible – and with as few separate funding pots as possible. The rationale in the bus sector is that a single pot would simplify, and bring under control, the nightmarish complexities of the current arrangements and allow more local discretion on how that pooled budget could be best applied in each local circumstance.  This is not too hard to make work in a Quality Contract environment. Not so easy without a Quality Contract as it’s not clear why operators would sign up (or could be compelled to sign up) to a single pot which would effectively remove the connection between the cost of the statutory NCTS and the reimbursement they receive. If NCTS wasn’t statutory then that would help the LGA proposition – but there’s no sign of that happening before the next election. Operators too are unlikely be overly enthusiastic about forwarding their BSOG cheques to every local authority – given some local authorities’ apparent preference for road schemes over tendered services 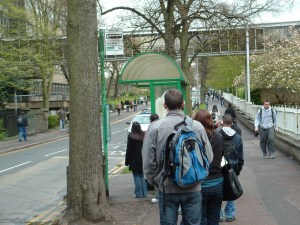 pteg’s position is somewhere in the middle. We believe that it should be possible to find ways of ensuring that BSOG (as opposed to a single pot of all subsidies)  is targeted in a smart way in each Met area to meet both PTE and operator aspirations and objectives. However, we would want to do this through a process based on transparency, clear objectives and consultation with operators. For example, if poor punctuality due to lack of bus priority is the main issue for operators in a specific area – why not use some of the BSOG funding to pay for better bus priority measures? This should be a win-win as it would bring down running costs, boost patronage and contribute to bus operators’ bottom line. Other options would include hybrid bus investment, filling gaps in RTI / smartcard reader coverage, or performance or patronage based incentives. Up to and including a local and finely targeted version of PPI. Of course there’s no reason why other LTAs couldn’t also meet the criteria for devolved BSOG – where there is a clear commitment to whatever conditions DfT chose to attach around transparency, consultation and clear objectives. Where local transport authorities can’t – or don’t want to – take on this responsibility then the status quo could prevail.

In the coming months we will see how hard the Government wants to push all parties towards a solution that everyone can (just about) live with and which Government can satisfy itself is maximising the benefits from all that increasingly precious public spending.

One things for sure though – the ‘no change’ option is now just an option. There’s a period ahead where all sides can try and shape a reasonably consensual solution. The danger is that if we don’t, we will have something done to us.

This article first appeared in Coach and Bus Week.