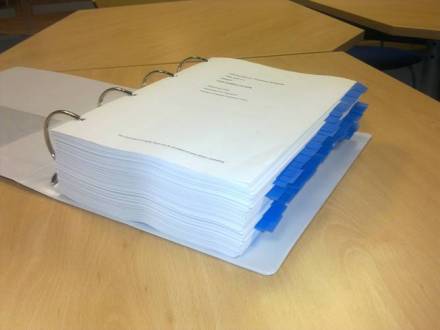 This is the ‘webTAG’ manual – all 650 double sided pages of it! It’s one of the hurdles that PTE transport schemes have to vault if they are to get the go-ahead from Whitehall. It’s become part of a wider debate about whether we are getting better at appraising things than we are at doing things? About whether appraisal and process is becoming a mini-industry itself? and to what extent is DfT imposed process getting in the way of decisions that should be made locally and for which decision makers should be locally accountable. The text of an article pteg submitted to Local Transport Today 544 (30th April) explores the issue in more detail…

As the strategic transport planning bodies for the city regions pteg believes it is essential that there is a consistent and comprehensive system for promoters and funders to assess transport schemes on a comparable basis. Whether they be highways or public transport schemes, or measures such as smarter choices.  This is why pteg has worked closely over the past decade with the Department for Transport on the development of NATA. It’s right that NATA should also develop to make the best of new modelling and appraisal techniques and that it should be amended so that the appraisal framework captures current priorities. The debate in these pages on the future of NATA is therefore timely.

Although the NATA framework ensures the BCR is presented within the Appraisal Summary Table, pteg still has a concern regarding the level of influence given to the scheme BCR (Benefit Cost Ratio) in decision making. It should be remembered that all BCRs will be calculated on a range of assumptions and caveats and some costs and benefits are captured with more certainty that others. Because of this, pteg believes that the BCR should be used to aid decision making alongside a broader qualitative and quantitative assessment of a scheme’s impacts, rather than simply being used as the principal criteria to make a decision.

Promoters are required to spend significant resources building increasingly complex and large forecasting models in order to meet WebTAG and NATA criteria. There is an important debate to be had as to whether this results in better decisions, especially when as part of the approvals process, the Department calculates its own ‘DfT adjusted’ scheme BCR. It is this ‘DfT adjusted’ BCR that forms the advice to Ministers and does not necessarily reflect the costly modelling work which was undertaken by Promoters. We’re also concerned that the ‘DfT adjusted’ BCR, nor the rationale behind it, is also not readily available to scheme promoters.

Responding to the Department’s recent consultation, pteg  highlighted a number of key themes which the Department for Transport should follow when reviewing NATA:

Ensure that there is greater proportionality between appraisal effort and scheme capital cost through the greater formalisation of a light touch approach. A light touch approach would only be beneficial if it reduced the promoter development costs and shortened project development timescales, thereby increasing the number of schemes delivered. pteg believes that the current approach falls well short of this goal.

pteg believes that much of the modelling guidance provided in WebTAG and NATA guidance is too onerous and unnecessarily complex. In other sectors, decisions are made on other public sector investments without the level of modelling work required by the DfT.

Integrate DfT Major Scheme guidance within the NATA/WebTAG guidance in order to provide greater alignment between DaSTS, LTP3 and Regional Funding Allocation systems. There also needs to be clearer guidance in development of rail schemes which cross over between GRIP and Major Scheme processes. As part of this a light touch GRIP approach would be useful for developing some rail scheme proposals.

It’s important to emphasise again that pteg supports the principle of NATA. Our concerns are around the detail of its application.  Fundamentally though, while NATA has been incredibly beneficial in improving the information provided to decision makers, NATA has not helped to resolve the inequalities in the levels of capital spending between the English regions and London. Appraisal using NATA shows the benefits to the economy and the environment that will be delivered by investing in transport in the regions. But, the £500m London Victoria Station proposals which is just one of many huge investments in the Capital is equivalent to the total 5 year spend for the entire Yorkshire & Humber Region in the Regional Funding Allocation. This huge disparity will increase further if the Treasury cuts the funds available for transport investment in the Regions.